It was happy hour in Reykjavik.

When one spends any time in this city, one realizes that happy hour is a legit thing: it’s a festive time when drinks are discounted, making them more accessible to the average person’s budget.

One of Chris’ goals was to get an Icelander to talk to him. He had had little success with this.

We did, however, find that bartenders didn’t mind talking to us, happily answering our very American questions. We met a diverse group of people from Turkey, Ireland and Romania.

“I came here for the nature,” said the pretty Romanian bartender named Eva (not her real name). “But when you work all the time, you don’t see much nature.”

She asked where we were visiting during our short, four-day Iceland trip. Chris, who had made a spreadsheet and an itinerary that accounted for just about every waking moment, enthusiastically shared our plans.

Eva wrinkled her nose and muttered something about tourists and tourist busses. She encouraged us to look for more out-of-the-way places that weren’t quite as well-traveled.

“Do you have any suggestions,” Chris asked.

She mentioned a crater nearby, Kerið.

Upon further investigation, we found that it was not too far from some of our other planned destinations within the “Golden Circle,” which is a tourist route in southern Iceland. 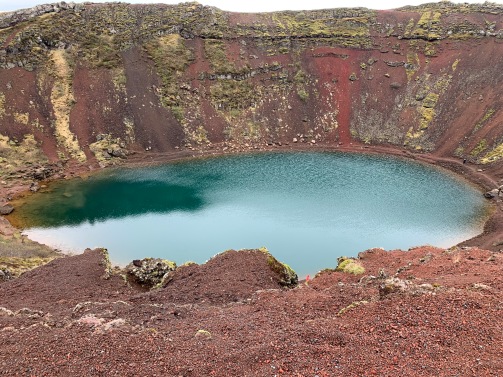 When we arrived at Kerið the next morning, several tour busses sat in the parking lot. So much for heading off the beaten path.

A small kiosk was set up at the “entrance” of the park and we were required to pay a 400ISK (about $3) entrance fee.

Eva would later scoff at this when we visited her again. “I can’t believe they’re charging to get in there now,” she said. I later read that this site is on privately owned land. The fee goes toward the land’s upkeep. 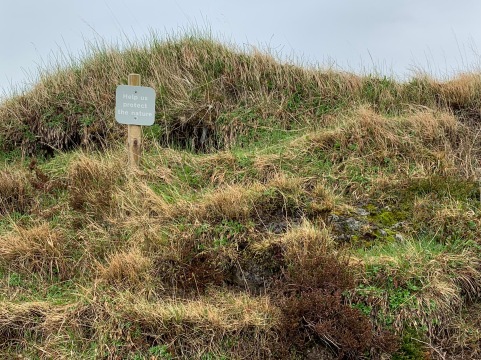 Kerið turned out to be breathtaking.

Located in the Grimsnes area of south Iceland, Kerið is thought to have once been a cone-shaped volcano. Scientists believe that this three- thousand-year-old volcano forcefully erupted, depleting its magma reserve and subsequently collapsing in on itself.

Throughout the centuries, the crater has filled with water; because of the minerals within the rocks, the water inside the crater takes on a bluish-aqua hue. The caldera is about 180-feet deep, 560-feet wide and 890-feet across. The water level is the same level as the water table, which rises and falls throughout the year.

The slopes leading down to the water (which you can climb, but we chose to not to) are red due to the iron deposits. We walked along the upper edge of the crater and looked down.

The craggy volcanic rock path surrounded by green vegetation took much concentration: this is not a place where you would want to trip and fall down.

We visited in mid-May; it was cold and rainy. The ice on the lake had melted by this time. A review by another visitor in April complained that the lake was frozen and had dirty snow on it.

We stood on a corner at the top of the crater and took our photos with the Iceland flag we had brought. The awe and beauty of this literal mountaintop experience was something that we never wanted to forget. 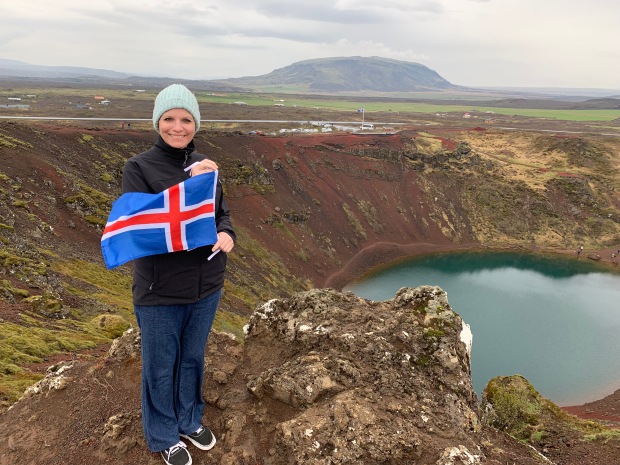 Hi there! I’m Mary Ann. I’m a writer, editor, and traveler. Thanks for visiting!